So you want to make movies? You could go out and buy an expensive camera, build an even more expensive movie set, spend weeks finding actors, rehearsing, designing costumes, etc. Or...you could buy a couple of little plastic robot guys on the cheap, download the free Stikbot app, and start making movies today!

What's the Heck Is Stikbot?

Created in 2015 by Zing Studios based out of Hong Kong, Stikbots are little poseable plastic, vaguely robot-like figures with suction cups for hands and feet. Hence the name, Stik-bot. They come in an assortment of colors, and they have articulated joints that hold their position. This allows you to pose them at the knees, hips, waist, shoulders, elbows, and neck. The suction cups allow you to stick them to any smooth surface pretty much indefinitely as long as you have a clean and tight seal. They're blocky, but they're supposed to be. It's part of their charm.

By themselves, Stikbots would just be a cute little toy to play with for a few hours and then forget about. However, they're meant to be used in conjunction with the Stikbot Studio app and that's when things get interesting.

Quick Navigation
What's the Heck Is Stikbot?
The App
More than Just a Stikbot
Off the Grid and Tails of the Strange
Stik to It and You'll Unleash Your Inner Creative Genius!

The Stikbot Studio app is the secret sauce behind the success of Stikbot. The simple, easy to use app lets you turn your phone or your tablet into a stop motion camera. It's free to download and quite powerful. Among its various features is the ability to insert your own images as a background, use your own music or sound effects or choose from the Stikbot Studio's (free) library. The sound effects range from the silly (there are, I swear I am not making this up, ten different types of fart sounds including "wet fart") to the mundane (thunder, rain, cows, cats, dogs) to the extraordinary (lasers, dinosaurs, UFOs landing). The music similarly spans a wide variety of themes from wacky vaudeville to epic fantasy to techno action to club music.

The cool part is where you get to use green (or blue) screen technology to seamlessly insert your character into the shot. All you need is a green (or blue) piece of paper as a backdrop and just like magic, the only thing that's visible on your camera is your Stikbot against the image you've selected. Take a picture and, voilà, your Stikbot is now in Paris or space or the zoo or wherever you decide to set your movie.

An even cooler function is the "ghost image" feature which keeps a faint image of your previous shot on the screen for you to compare your new shot to. That way you know if you've positioned your Stikbot the right way. This will come in especially handy when you start using multiple Stikbots and props to make your epic movies.

But before you go full Spielberg, you're going to need a little help.

For example, there's a video about walking. It seems like such a minor thing but have you ever really thought about all of the movements your body makes when you walk? Your arms swing, your legs pump, your body sways slightly back and forth and you do that repeatedly every second. It's a lot of, ahem, steps just to take a step.

There's also a video about different ways to "lock down" your phone/tablet so your video comes out nice and non-shaky. It sounds like another simple thing but when was the last time you needed to position your phone or tablet in such a way that it wouldn't budge even a little bit?

For the more advanced Stikbot movie maker, there's a video about lighting. We've all taken a selfie with the light behind us and ended up with a lovely silhouette of our heads. This video explains how to use lamps to light up movie sets to get the exact effect you're looking for.

There's more and Stikbot Central (the Youtube channel) regularly adds new videos so you can continue to refine your craft.

More than Just a Stikbot

Stikbot comes in a slew of colors including several see though variations. But why stop with just colors when there's so much more you can do? Zing has produced several sets of customized Stikbots and Stikbot animals as well some cool sets to film your movies on.

While Stikbot Central's amazingly awesome series Off The Grid (OMG it's insane!) is made with cardboard boxes and random knickknacks, they also sell four movie sets for you to film on: 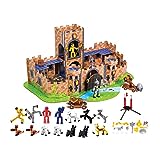 This set comes with a green/blue screen background, a castle you have to assemble (with a moat and a working drawbridge!), two Stikbots, several Stikbot animals, a catapult, a ballista, an assortment of medieval weapons, and a tripod for your phone. With this set, you can stage everything from your own Princess Bride reenactment to the siege of King's Landing from Game of Thrones! Just keep your holocaust cloak handy and watch out for that Wildfire...it's nasty stuff.

This set comes with a green/blue screen, a farm requiring assembly, two adult Stikbots, two kid-sized Stikbots, Stikbot farm animals, and a...panda? Sure. OK. It also comes with farm tools, a tractor, a pickup truck, stickers to make your Stikbots look like farmers, and a tripod for your phone. With this set, you can film the simple life or if you're really creative, figure out why there's a panda running around.

This set comes with yaaaaargh! Who cares what it be comin' with ye landlubbers?! Set sail on the high seas and head off for an adventure with gorillas, monkeys, pirate gear and...more pandas. What be with the pandas, matey?! Answer or ye be walkin' the plank! 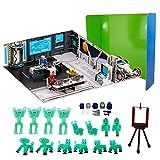 This set comes with a green/blue screen, the bridge of your very own spaceship to assemble, four glow in the dark Stikbots, glow in the dark cats, dogs, rabbits, and monkeys and two glow in the dark aliens because apparently in space, not only can no one hear you scream, everything glows. There are also cool space helmets, space lasers (you'll have to add your own "pew pew" sound effects), a Moon rover-type vehicle and a tripod for your camera. The possibilities are as limitless as space itself as you travel to infinity and beyond or to a galaxy far, far away...

This basic set comes with a dinosaur pen to assemble, a crane (for moving dinos?), a dino-hunting jeep, a dino-hunter/dino-snack Stikbot (you decide if he lives or dies), and costume stickers for your Stikbot. You can get classic with your own Jurassic Park and have your dinos run rampant or do something entirely new. The power is in your claws...errrrr...hands!

Note: As of this writing, this set doesn't seem to available anywhere despite being listed on Zing's site. This is presumably because the Dino Stikbot series has just been released. Tthere will almost certainly be a deluxe version released as well with a comparable price to the others listed above.

Because people get boring after a while, Zing produced pets for their beloved Stikbots to play with on camera! These little critters give creators vastly more options for stories and action and, let's face it, animals are just more adorable! So far, there have been two Pet Series but there will obviously be more.

The StikRabbit only comes in white. The StikChicken only comes in white or yellow. The rest come in clear red, blue, brown, or lime like the first series. And, yes, most of these are really stretching the definition of "pet" which is probably why Zing decided to come up with their next set of characters: Safari Pets. 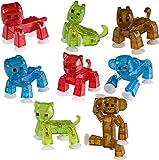 So far there are only four of these mighty beasts, but there will surely be more coming (although, let's be serious, how they put a gorilla with a horse and cow but not with jungle animals is a mystery). If you want your Stikbots to get up close with the some of the most dangerous animals alive today, you have your choice of:

All four come in solid gray, green, red, and blue. 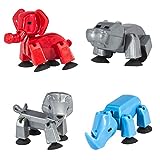 Released just two months ago, Stikbot Dinos brings the great beasts of the past into your movie repertoire. Stikbot Dinos also represents a bit of a divergence for Zing as there are two kinds of dino: Full size Mega Dinos and smaller collectible Dino Eggs. The Dino Eggs are blind buys meaning you don't know what's in it until you open it so if you want to get the full set, you'll have to either trade or roll the dice.

These three come in clear red, green, and blue.

There's an awful lot of dinosaurs so if this series does well, expect to see a lot more of these, particularly if the collectible angle catches on.

These are different sets of accessories for your Stikbots to make them look like a variety of characters. There's an entire set of helmets and hats to make your Stikbots into knights, ninjas, pirates and more. There's wigs to make your actors into zombies, surfer dudes, detectives, and there's even an afro that's blonde for some reason. A second set of wigs can turn your Stikbot into a Super Saiyan, Princess Leia, and give them some facial hair.

Each set also has an assortment of weapons like Thor's hammer, Wolverine's claws, and Aquaman's trident (but not really those weapons because that would get them sued out of existence).

Off the Grid and Tails of the Strange

Off the Grid and Tails of the Strange are two original web series created by Stikbot Central. The first is a "low budget" post apocalypse battle between good and evil featuring a slew of regular action figures from Darth Vader to the Predator to Doctor Who to, well, spoilers don't you know? The second is a take off of Stranger Things replacing the kids with pets and Eleven with a...blue monkey? Yeah, you just need to watch it.

Each series has hundreds of thousands of views and they're really quite good. In fact, they're so popular that Zing made exclusive Stikbots and Stikanimals based off of the customized characters from their shows. If you're a fan, these are must haves.

There are two sets for Off the Grid.

And a single collector's box set for Tails of the Strange available at Amazon as well. If you want to continue the story on your own, or just recreate your favorite scenes, now you can! 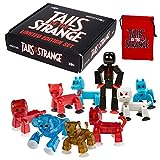 Now if you'll excuse me, I have to go back off the grid...

Stik to It and You'll Unleash Your Inner Creative Genius!

For a decent rate of animation, you're looking at 15 pictures for just one second of video. Clearly, the Stikbot app is not designed for little kids in mind. It's not that they couldn't understand how to use it (it really is pretty easy), it's just very time consuming. But if you have an older child, maybe 7-8 and up that has the patience and a burning desire to make movies, this is the perfect way get them started! The simple, powerful app combined with a relatively inexpensive set of props and they'll only be limited by their imagination.

And if worst comes to worst? Stikbots make for pretty fun toys even when not being used to make movie magic.