Are you in the market for a wireless headset? If you’re a gamer, enjoy watching TV without interruptions, work in a cubicle space or love listening to music with excellent sound, then you need a wireless headset.

In today’s modern world of technological advances, there is no excuse to be still using an old-fashioned headset with wires. Upgrading to one of the best wireless headsets will forever change the way you play games, watch movies, work out, and listen to your favorite tunes.

The main benefit of a wireless headset, whether at home or work, is the superior freedom of movement. There are no wires to become tangled up in and less of a limit on how far away from the television, pc, workstation or stereo you can move.

Additionally, other benefits of using a wireless headset at work include a much higher rate of productivity, better quality sound than traditional telephones, and less sore muscles from answering and holding the telephone dozens of times per shift.

Things to Consider Before Buying a Wireless Headset

Sound quality is one of the most critical aspects of any headset. Whether a gamer, music-head, or cubicle worker, high-quality audio is an absolute must in a wireless headset.

Most wireless headsets either connect through Bluetooth or Wi-Fi signal. Bluetooth headsets offer a higher level of compatibility with multiple devices, while Wi-Fi headsets provide a much longer signal range.

The ability to move away from the phone, TV, or PC without the signal breaking up is another vital aspect of a wireless headset. Typically, a wireless headset with a Wi-Fi-based transmitter will offer the most extended range possible.

The level of comfortability afforded by your wireless headset is one of the most important considerations. Whether working at the office or listening to tunes while working out at the gym, the last thing you want is to have to continually adjust your headset because it’s digging into your ear or falling off your head.

An often overlooked aspect before purchasing a wireless headset is the controllability, which can be vastly different from product to product. Some headsets have touch controls on the earpiece, voice control, and external smartphone apps.

One of the most significant differences people need to adjust to when moving to a wireless headset from a wired one is the battery life. Most wireless headsets allow for several hours of usage; some even hold a full 24 hours worth of a charge. Another thing to consider is the actual charge time itself. Some models require charging overnight.

Now that we’ve covered the basic info necessary to consider before buying a wireless headset let's take a look at some products. Here is our list of the best wireless headsets of 2019, in no particular order:

The Mpow 059 is one of the best selling wireless headsets of recent years and with great reason. It boasts 13 hours of high-end immersive Hi-Fi sound when fully charged and a superior Bluetooth capability with a range of 33 feet. The stainless steel headband and ear cushions make this one of the most comfortable wireless headsets on the market. You can easily connect to TVs, consoles, tablets, smartphones, and more with the Mpow 059. This headset can also transform into a wired set with a USB cable.

The Beats Studio3 wireless headset comes from one of the most iconic names in the industry. Benefits include a 30-foot Bluetooth range, adaptive noise canceling, and super fast charge time. The rechargeable batteries hold a charge for up to 22 hours, allowing for all day extended usage. Form fitting soft earcups make for superior comfortability. If the batteries die on you, you can create a wired headset by plugging a RemoteTalk cable in. A USB cable, instruction manual, and hard case come with the package.

Bose is one of the best producers of headphones and headsets in the world. Connect to up to two devices with the Bose SoundLink Headset II. Enjoy crystal clear sound within a 30-foot range. Take phone calls, listen to tunes, or play games for up to 15 hours at a time with one of the most superior sounding and comfortable wireless headsets on the market. Recharging takes up to three hours. Easily make adjustments with the conveniently placed controls that are right on the earphones. 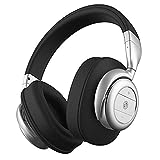 The second wireless headset on our list produced by the enigmatic brand, Beats. The main features of this award-winning headset include a more than impressive 40-hour battery life, five minute charge time for up to three hours of playtime and Bluetooth connectivity. Fully cushioned ear cups for superior comfort and the highest-quality sound possible from a Bluetooth headset are some of the additional benefits of this wireless headset. A RemoteTalk cable and carrying case also comes with your purchase.

The second Mpow product to make it onto our list, the H5 is one of the most impressive wireless headsets for under $50 that we found, period. Due to the full range of compatibility with Android, iOS, tablets, PC, TV, MP3, MP4 and more, this headset is perfect for serious gamers. The H5 has a comfortable design as well as active noise canceling. A carrying bag, charging cable, and an audio cable also comes with this headset.

TaoTronics is one of the lesser known brands that we discovered while researching the best wireless headsets for our list. However, we found that this headset more than deserved mention. Some of the main features are Bluetooth capability, noise-canceling tech, and an adjustable headband with 90-degree swiveling earcups with leather cushions. Playback time lasts for 25 hours. Hands-free calling, a built-in mic, and bass boost are additional noteworthy features. This product comes with a carrying case, USB and audio cable, and a user manual.

Another Bose wireless headset, this one is even nicer than the last. The main features include EQ optimized to your chosen volume levels, noise cancellation, built-in dual microphone and hands-free phone calls. Bluetooth and NFC connections are both available, allowing you to pair with practically anything you can imagine, including Android and iOS devices, tablets, PCs, and smart TVs. Long lasting battery life provides 20 hours of wireless playback and double playback time when using an audio cable.

The RS 175 RF wireless headset from Sennheiser is one of the coolest products we had the pleasure of researching for our list. It is one of the only wireless headset systems that allow for two pairs of headphones to listen to the same source at once. Whether gaming, working, or just jamming out, the RS 175 RF provides some of the highest-quality audio on the market. Main features include a powerful multi-purpose transformer, bass boost, closed back cushioned earphones, well-designed controls, and so much more. The long-lasting battery allows for 18 hours of playback time. Also, one of the greatest benefits to this wireless headset is its 330-foot linear range. 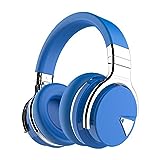 The final item on our list is the E7 by COWIN. This wireless headset comes with 40mm speakers that allow for a bigger sound. They are lightweight, cushioned, and fit over your entire ear. Additional benefits of the E7 headset are noise cancellation, 30 hours of playback time, and Bluetooth 4.0 and NFC connectivity. It also comes with a compact case for carrying your headset with you wherever you go.

Mpow’s H5 is the best wireless headset of 2019 for gaming. The H5 is compatible with any platform you play on due to its versatile range of compatibility with smart devices, PCs, smart TVs, and more. This is the ultimate wireless headset for gamers.

The Bose’ QuietComfort 35 Series II is the best wireless headset of 2019 for PC. The QC35 Series II not only produces some of the best sounds in the industry, but it’s also compatible with virtually any device or system you can imagine, making it perfect for any brand PC or laptop.

Beats Solo3 Wireless Headphones are by far the best wireless headset of 2019 for music. Compared to other major brands, the Solo3 has far more benefits. Including a super fast charge time, 40 hours of playback time, superior sound quality and so much more.

Best Wireless Headset of All

The Sennheiser RS 175 RF Wireless Headset is the best all-around wireless headset of 2018. Whether gaming on your console or PC, watching TV, listening to tunes while working out at the gym, or creating music tracks of your own, the RS 175 RF has it all. You can even expand this system to include an extra pair of headphones.