RC airplanes are a lot of fun, but buying one can be a chore and a half. Some RC airplanes are hard to fly. Others are expensive. Some are worthless. But how do you know which is which? When you buy yourself a remote controlled plane, will you be flying high or will there be nothing left of that piece of junk but the black box?

What To Look For When It Comes To RC Airplanes

When you are purchasing your first RC plane, you should remember that stability is key. Before you concentrate on looks, you should learn the craft by buying a plane that is stable. The wing should rest on top of the fuselage. The weight of the fuselage below the wing will stabilize the plane and help it right itself after a turn.

You also want to find a plane with a noticeable dihedral. That is the upward "V" angle of the wings when viewed from the front. A strong dihedral means more stability, which is essential when one is learning to fly. This will also aid in turning your aircraft.

You'll also want to consider whether your plane has a combustion engine or an electric power motor. Electric motors are generally cheaper and easier to fly. They are also quieter, more beginner-friendly, and require fewer accessories.

A combustion engine requires more accessories than the electric option. You also have to deal with fuel costs and the fact that they will be less welcome in public places because of the noise.

Also, you want to consider the number of channels, or controllable functions, your plane has. Single and dual-channel planes are easy to fly, but far less rewarding than RC airplanes with three channels or four channels. Of course, if you are just learning, there is no harm in keeping it simple. If you're an intermediate or expert, you can, of course, make more bold choices with your RC airplanes.

Quick Navigation
What To Look For When It Comes To RC Airplanes
Which of These RC Airplanes is the Best?​

The HobbyZone Sport Cub S isn't for kids. It isn't for adults. It's for everyone. This RC airplane won the 2015 Nurnberg International Toy Award for the teens & family category. The Sport Cub S features SAFE (Sensor Assisted Flight Envelope) technology that allows anyone to fly it regardless of skill level.

This RC plane has multiple flight modes suited for anyone from beginners to advanced users. SAFE helps steady the plane in windy conditions. It also features Panic Recovery mode, which helps it regain stability with a simple trigger pull.

This plane's flight time is very short -- about eight minutes. Fortunately, it only takes around 30 minutes to charge. So with a few extra batteries, you can keep the fun alive pretty easily. The range of the Sports Club S is pretty decent at 300 feet. Since you'll want to keep it relatively close, so you don't lose sight of it, that should be plenty of space.

The weak point of this plane is its motor, which you should let cool for a bit between flights. However, it comes fully assembled and ready to fly, so you can be ready to take off as soon as it's charged! You can buy the Hobbyzone Sports Club S for just over $100. 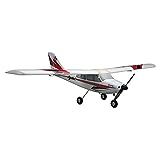 The E-Flite Apprentice S 15e has a massive price tag of more than $280. But assembly is easy enough, and this is an insanely stable aircraft. Like the Sport Club S, this RC airplane is equipped with SAFE technology to help you fly no matter what your skill level.

This plane is very large. It has a 59'' wingspan, which makes it more stable in the air. However, it's also hard to lug around because of its size. This also means you will need a large area in which to fly and land it. While there is a learning curve, this RC airplane also features a "panic button" to level it out in emergencies.

Whether you're just starting out or a more advanced RC aviator, this plane has a lot to offer you. 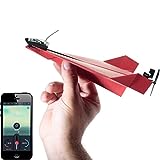 The PowerUp 3.0 Smartphone Controlled Paper Airplane is not so much a plane as it is an arts and crafts experience combined with the joy of bringing your creation to life. This isn't the most advanced piece of technology in existence, and it won't win any awards. Yet the PowerUp is a lot of fun whether you are playing with your kids or just looking for something to do to kill some time.

Operating it is simple. First, you fold a paper airplane. Next, you clip the motor and propeller on to your creation. Then you simply connect it to your smartphone or another device via Bluetooth. After that, it's off to the skies with you!

The app is very nice. Not only does it allow you to set the motor speed and turn easily, but it will also keep you informed of battery level, signal strength, and compass heading. The PowerUp has decent range, but be warned: if you fly out of range, the plane will keep going. You're going to have to chase it. Wind is also the enemy. You're flying a lightweight paper airplane with some plastic attached, after all.

You'll get about 10 minutes flight time out of the PowerUp before it needs recharging. Charge time is mercifully short, taking about 20 minutes to juice it back up. Unfortunately, the battery can't be removed or replaced. Since you can't bring extra batteries with you without purchasing another unit, you're going to have some downtime.

The controls on the PowerUp aren't the most accurate, but it's a great time for a $50 investment.

The Volantex ASW28 V2 Sail Plane is huge. Boasting an eight-foot wingspan, this sailplane is something that requires a lot of space. It doesn't come with a transmitter, receiver, or battery so you will need to purchase them separately.

But it flies beautifully thanks to its 850KV brushless motor. This glider has an ultra-durable blow molded plastic guild fuselage. The wings are made of foam. The design makes it, so if you crash a few times (like you will with any RC airplane), you won't completely destroy your investment.

Since it doesn't come with many of the essentials, the price may seem daunting at almost $150. But with its solid construction, it's definitely worth considering.

The ZETA FX-79 Buffalo FPV flies like a dream -- and it had better for close to $250. First off, this beast is beautiful. This massive aircraft has a 6.5-foot wingspan. It can be difficult to assemble, as you need lots of space, but this is meant for experienced hands and an even more experienced pilot.

You'll need to get your own batteries, transmitter, and receiver, but that's ok. This is one of those RC airplanes that is intended to be customized. Enthusiasts will love this plane's capability as a first-person view drone. The sizeable and roomy fuselage allows you room for as much customization as you could possibly want. However, this could be more than a little expensive so be wary of that.

Got $350 to blow? Are you an experienced lover of RC airplanes? The X-UAV Clouds is an impressive (and massive). This First-Person View capable RC airplane can fly for up to three hours without a break with the right setup and a good battery.

The huge fuselage will hold whatever you want to throw in it. It has an impressive six-foot wingspan and is capable of a maximum cruising speed of almost 50 miles per hour.

Once again, this is not something that belongs in the hands of a novice. But if you know what you're doing, you can't go wrong with this RC plane. 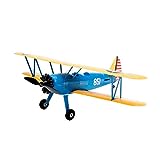 Fans of World War II biplanes will love this RC airplane. The E-flite UMX PT-17 BNF Airplane comes with everything but the transmitter. You're going to need to put this thing together yourself, but it's a fairly easy task. You'll also need to pick up a four-channel transmitter.

The flight time is only about eight minutes, but it flies smoothly and is capable of some impressive stunts. Transmission range is about 660 feet, but this is a small aircraft so you'll want to keep it close enough to see it anyway.

The biggest complaint we have seen is that the lower wing is thin and breaks easily, but it is also easy to repair. It's also difficult to control in high winds, but that's to be expected because of its small size. You can pick this plane up for around $100.

Which of These RC Airplanes is the Best?​

Every single one of these RC airplanes has a lot to offer. If you're an affluent individual, the X-UAV Clouds is a premium experience. The Buffalo is also excellent if you have money to spend. If you like doing things with your hands, the PowerUp is an excellent (and affordable) option to satisfy the craftsman in you.

But most people don't have a lot of money to throw around, and paper airplanes aren't enough to satisfy most RC airplane, enthusiasts. After examining the specifications for each as well as customer reviews, we feel that the best is one that can appeal to a wide range of customers while still providing a quality flight experience.

For this reason, we feel that the E-Flite Apprentice S 15e is the best. It's more affordable than most models we have examined, easy to use for beginners with adjustments for more experienced pilots, and very popular with owners.

While you could say that some of these models are "better," those are typically money sinks that will cause people without large sums of money to invest to balk at the thought of ownership.

RC Motorcycle: The Best Models in the Market this 2019