Who doesn't love going fast? Gas powered nitro RC cars are a lot of fun. They're powerful. They're fast. But there are a lot of options out there! Determining which nitro RC car is right for you can be quite a task.

While you've probably seen electric-powered radio-controlled cars in the toy aisle, you can find some serious hardware where RC cars are concerned. Nitro RC cars pack some awesome power. Regarding speed, customization, and durability, you won't find better than a gas-powered RC vehicle.

Electric RC cars are easier to maintain, less messy, and easily more convenient than nitro RC cars. However, they're also boring by comparison.

What Is a Nitro RC Car?

Nitro RC cars use glow engines powered by a methanol-based fuel containing nitromethane. This is where they get their name. While electric RC cars are simple to set up, these vehicles require an investment of more time, effort, and money.

They're meant to be taken seriously, as they are more difficult to control than their electric counterparts. It's also a bad idea to allow children to play with them, as they use poisonous and flammable fuel. Also, crashing at the speeds at which these cars are capable can destroy them.

Compared to removing an electric RC vehicle from the box, inserting the battery, and driving, setup of a nitro RC car can be a real pain. You need to make sure it has fresh batteries for the servos and receiver, check the air filter, make sure the tires aren't flat, and ensure that it's properly fueled. You have to do a lot more maintenance.

Plus, the fumes from the fuel as well as the noise make them better suited to outdoor use than electric RC cars. You'll also need to remember that they are noisier cars so you will need to be careful not to wake your neighbors late at night and early in the morning.

What You Should Know About Buying Nitro RC Cars

Your new car will generally include the car itself, a transmitter, a glow plug, and miscellaneous parts. But you're going to need a lot more than just a nitro RC car to get started. You'll need a nitro starter kit which contains basic tools and things you will need to have for the car. Of course, you will need nitromethane fuel for obvious reasons. You'll need after-run oil to keep the engine lubricated as well as spare glow plugs in case the one you have burns out. As we mentioned, ownership of a nitro RC car involves a lot of maintenance.

You'll also want to "break in" the engine. Run your new car slowly for a few tanks of gas. Let it idle for the first tank. For the second tank, drive it on a flat surface at about 25 percent throttle, pumping every few seconds. For your third tank, do the same thing but at half speed. Once you have hit your fourth tank of gas, you're ready to run your nitro RC car at about 75 percent throttle. Your fifth tank and onward allows you to begin to push your car, though you still don't want to go at full speed for more than a few seconds at a time. If you don't break in your car, you could damage the engine.

After you're done, you should always remove and burn off extra fuel. Nitro contains alcohol, which attracts water and can rust the engine. While having fun is important, it's even more crucial to remember your after-run maintenance.

So, what are the best nitro RC cars? 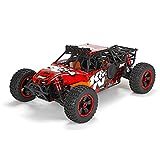 The Losi K&N DBXL 1:5 4WD RC Gas Buggy goes where you go -- and for close to $1,000 it had better! This nitro RC car's four-wheel-drive drivetrain, roll cage, and durable body help it drive in the harshest of conditions. Hills and mountains? No problem! Desert? This thing has it covered. Wartime conditions? Probably not, but this is one of those rare nitro RC cars that will handle almost anything you throw at it with ease.

A single tank of gas will bring you more than 40 minutes of action. While its many plastic parts will break in a bad crash, you can easily swap them out for aluminum or carbon fiber replacements. This costly yet satisfying beast accelerates like a champ, brakes fast enough to avert disaster, and looks great doing its thing.

If you're looking to have a great time with a machine that will handle almost anything you throw at it, this nitro RC car will make you happy.

The Traxxas Jato can reach 60 miles per hour in just 4.2 seconds. Your tank will empty in five to seven minutes, but they'll be a fun five to seven minutes. Also, you'll be "behind the wheel" faster than you will with many other nitro RC cars because the Jato is RTR (ready to run). You only need batteries and fuel to get this thing on the road.

Pre-installed telemetry sensors help with engine tuning and provide real-time feedback about engine temperature, voltage, speed, RPM, and more. If you are new to nitro RC cars, the push-button EZ-Start system takes a lot of the hassle out of getting your car running.

The Jato excels at on-road driving and can handle off-road as well. However, many other cars will perform much better when driving off the beaten path, especially given its limited durability.

The Kyosho 33201B FW-06 Audi R8 Nitro RC is a thing of beauty. This radio controlled vehicle is built for on-road driving, and it does that very well. If you prefer rougher roads or harsh terrains, you should definitely consider other options. But if you want a nitro RC car that is sleek, stylish, and fun, this is the car for you.

This car comes fully assembled. Its quick-refill fuel tank cap allows you to refuel on the fly. This car won't stop until you want it to (or until you run out of fuel). If you're the sort of person who enjoys blazing around a track, this car is exactly what you're looking for.

The Traxxas Nitro Rustler is spectacular for off-road driving. Not only is it built to handle all kinds of terrains, but it has a top speed of up to 50 miles per hour. This nitro RC vehicle features EZ-Start, which removes a lot of hassle from the sometimes arduous process of starting a nitro RC car.

A major bonus to owning this vehicle is that numerous replacement parts and upgrades are available, making it easy not only to repair but to customize. This RC vehicle has been around in various iterations for over 20 years, and with good reason. It's proven over time to be a great option for beginners and veterans alike.

The Redcat Racing Avalanche XTR Monster Truck is perfectly suited for rugged, rocky, and otherwise tough terrain. This vehicle features huge tires, strong shocks, and solid construction that will handle anything you throw at it.

This four-wheel-drive vehicle comes ready to run and, thanks to its composite dual disc brake system, will stop on a dime if you need it to. Its huge engine delivers all the power you would need. However, if you want a fast vehicle, the low speed of the Avalanche will leave you wanting. It's also not well-suited to terrains that aren't rough and rocky.

The Redcat Monsoon XTR Nitro Truggy is, as the name suggests, a combination of a truck and buggy. The Monsoon is suited for nearly any terrain. Its top speed is not the most impressive at just over 40 miles per hour. This vehicle will handle rough terrain nearly perfectly. Since it comes fully assembled, you just need to gas it up and throw in some batteries to get moving. If you're looking for a nitro RC car that is a beast both on and off the track, the Monsoon is an excellent option for you.

The Redcat Lightning STR Nitro is absolutely beautiful -- and it runs beautifully as well. The car comes fully assembled, so all you'll need to get started is nitro fuel, batteries, and a glow plug.

This car is relatively fast, clocking in at 45 miles per hour. It's also durable, which helps when you inevitably crash it (hey, it happens). This vehicle features a lightweight aluminum chassis, which enhances performance. It also has oil-filled shocks to enhance handling, as well as aluminum-capped disk brakes.

Naturally, this car won't handle off-road situations very well, but if you need something that will provide superb performance on-road, the Lightning is a relatively cheap option for you.

Which of These Nitro RC Cars Is the Best?

A nitro RC car is a huge investment, even on the lower end. It's important to examine the specs of your potential purchases and consider where you will be driving. If you're going off-road, you'll be happy with the Redcat Avalanche. The Kyosho Audi R8 is amazing for smoother surfaces. If you're on a budget and don't plan to go off-road, the Lightning is something to consider.

But let's face it -- you're making a major purchase anyway, so you probably want a vehicle that can handle most situations. Since you're buying a big-ticket item, there's no harm in saving for a quality machine. That's where the Gas Buggy comes in. Sure, it will cost you a hefty chunk of change, but there's little chance you will be unhappy with your purchase. Its efficiency, power, maneuverability, and looks are all top-notch. If you're going to make a large purchase like this, why not splurge?

We selected the Losi K&N DBXL 1:5 4WD RC Gas Buggy as the best based on an analysis of its technical specifications, reviews of footage, as well as customer reviews.

While other nitro RC vehicles excel in some areas more than the Gas Buggy, this is the best all-around car we have seen.

What Are You Waiting For?

Nitro RC cars are a lot of fun. If you're prepared for the maintenance and responsibility of ownership, you're sure to have a blast with your new radio-controlled vehicle. No matter what is your ultimate decision, you will want to examine the pros and cons of each vehicle carefully. You'll want to consider where you will be driving your RC vehicle and make the decision that is right for you.

The most important thing, though, is that you have fun.