When your child tells you they want a Fingerlings, it's hard to know what to expect. With all the gizmos and gadgets flooding the market today, you might not have heard about these little robots who hang out on your finger. But if you have a child, you already know the draw of small animals who interact with them.

We live in the age of robots. Most kids (and adults for that matter) want a little WALL-E or Baymax of their very own. So, we as parents scour around at holiday time when shopping is at a peak to find something to feed their desire.

Enter the Fingerlings who hit the wickets of cute and interactive at a decent price, and you've got a hot toy that all the kids will want. Unfortunately, the news about this particular toy isn't all good. Read on to find out the good, the bad, and the ugly of these cute toys, inspired by a viral video and brought to life for your child.

Quick Navigation
What Are Fingerlings?
Stacking WowWee's Robots Up Against the Competition
The Pros and Cons of These Interactive Pets
Should You Fill Your Fingers with Monkeys?

Fingerlings, which were released in 2017, are miniature plastic robot monkeys that cling to your fingers. They respond to touch, sound, and motion using the latest technology.

When you switch them on, Fingerlings interact with you using 40 different animations that bring them to life. The monkeys chatter and blow you kisses, and you can take care of them by rocking them to sleep. The robots react when you walk by, when you talk to them, and when you touch them. Plus, they're portable. They fit on your finger, hence the name, so they're lightweight and easy to carry around wherever you go.

Perhaps the cutest thing about this toy is the inspiration for its design. The Fingerlings were dreamed up by the creative team at the WowWee company. The inspiration for the designers of the personal robot pets came from videos of a baby pygmy marmoset that went viral on the internet. The creators wanted to harness the cuteness of the marmoset and give it to children across the world.

Using WowWee Smart Tech, the team was able to accomplish what they set out to do: Bring the pygmy baby marmoset from the wild straight to your child's finger.

What these creatures do

The Fingerlings are interactive toys, so they respond to people. The little monkeys blink their eyes and coo. They sleep when you rock them and chatter when you pet them. The Fingerlings even have the technology to respond when you blow them kisses by blowing a kiss right back at you.

When you talk to your new interactive pet, they respond with a variety of different sounds, and when you clap, they sing. If you have more than one, they'll sing together. When you ignore them, the monkeys will whistle to get your attention. If you continue to ignore them, the technology will respond by sleeping. To work, they require four LR44 batteries, which you may know as button batteries. There are six creatures in the original collection.

The company doesn't specify everything your Fingerlings will do because that would ruin the excitement of discovery. They do mention that different combinations of sound and touch will elicit different responses. Like your smartphone where you don't read the instructions and discover new things it does after you've owned it for a while, WowWee tries to capture that sense of wonder. Part of the fun of an interactive pet is the surprise of at it will do, and nothing brings more giggles than trying something new and getting an unexpected response.

The technology inside and out

Using smartphone technology, Fingerlings have sensors placed on various parts of their bodies. This technology enables them to respond to touch easily. The microphone is designed to perceive sound around them and the technology is developed to filter out background noise. This feature lets the animal respond only to you and not all the sounds that exist in their environment.

When you rock the toy, the sensor located inside recognizes that and will respond by sleeping.

Although the little robot started with just monkeys, the company has expanded into different animals such as unicorns and sloths. To make the sloth more lifelike, the designers from WowWee slowed the technology responses and movements to resemble that of a sloth.

The love/hate relationship with tiny robots

People love the idea of owning a robot who they can interact with and who communicates back in a lifelike fashion. Who doesn't want to hold their very own tiny monkey? Although most kids love the idea behind Fingerlings, the toy doesn't live up to the hype.

Instead of a durable toy for the age group, the monkey is somewhat fragile and blows through its batteries quickly. Overall, the idea is fantastic, but the execution leaves a lot to be desired.

Stacking WowWee's Robots Up Against the Competition

There is no shortage of products on the market for kids and robots are more popular now than ever before. Some kids want a toy that interacts with them and gets as close as they can to real pet ownership. Some parents wish to provide robots for their kids that aren't annoying, are a reasonable price, and don't break when you look at them.

Here are two other products with the same general idea as Fingerlings to give parents and their kids more options to choose from in the robotics category.

Hatchimals, made by Spin Master, are similar to Fingerlings as they interact with you. They're also little robots who act as your pets and companions. When you purchase your Hatchimals, they live inside a Hatchimal egg, and you have to wait for it to hatch. Once it does, you have a plush little toy who needs care and love, while interacting with your voice and touch.

Hatchimals range in price from $59 to $100 depending on which retail store you choose and which Hatchimal you hope to get.

Overall, customers love Hatchimals, giving them 4 out of 5 stars on Amazon. These ratings account for 73 percent of verified buyers. 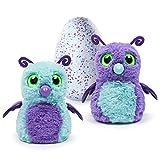 Bizzy Bubs are like Fingerlings because they also fit on your fingers, but instead of animals, Bizzy Bubs are babies. They serve as little playmates. Bizzy Bubs like to play, laugh, and interact with you. They also have their personalities and can crawl around and keep you busy.

You can find the Bizzy Bubs at a price range between $7 to $35 depending on where you shop and if you have a specific Bizzy Bubs baby in mind.

Although sales for the Bizzy Bubs on Amazon were lower than for Hatchimals, they received great ratings. Customers gave these robot babies 4 out of 5 stars on Amazon. Almost 90 percent of those ratings were at the top.

The Pros and Cons of These Interactive Pets

Should You Fill Your Fingers with Monkeys?

The Fingerlings are a fun little toy and they would make a nice gift for your child.

Your kids could get some fun out of their new little friend, but the enjoyment probably won't be sustained for an extended period. Like most toys, the novelty wears off, and like most of the toys in Toy Story, their fate lies in the toy box.